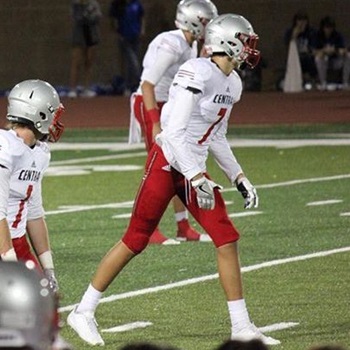 Club Member
Junta Member
I'm very excited about this offer. It's so hard to find 6'6" TEs with ball skills since most of those guys are focused on basketball these days. When CU finds those guys, especially in-state, we have to make them a priority. Bulk 'em up and we'll develop that position into a team strength very quickly the way so many B1G programs do it.

Club Member
From earlier this month:

Those Mizzou helmets are pretty badass

Taylor’s production on the field this next year may take a hit so don’t be alarmed. His coach at GJ Central (Shawn Marsh) accepted the Eaglecrest HC position. Their pass happy scheme will likely change as they not only lose their HC but also a three year starter at QB in Max Marsh who will be at Eaglecrest with his dad.

Club Member
When one normalizes his early offer list for being from Western Slope, I think it's 4-star.

Based on social media, I don't think so.

SewallBeach said:
Based on social media, I don't think so.
Click to expand...

Pictures of him drinking coffee...

Club Member
Junta Member
Safe to say he is near the top of the overall board.

Club Member
I hesitate to say this in a recruiting thread, but Barret Ruud and the whole Ruud family can go screw.

At this point there are a few schools that he is more familiar with that have the pole position in the race for his services.

“Iowa, Mizzou, and (Colorado) just because they’re local I get to get up there a lot,” Taylor explained. “I say Iowa because they’re basically ‘Tight End U.’ Noah Fant did great at the combine and is going to get drafted high. The other tight end (T.J. Hockenson) is going to get drafted high, so it’s crazy to have two tight ends going pretty high.”

There is still plenty of time for that leaderboard to change, though. Taylor doesn’t plan to reach a decision before making it out on many more visits.

“I want tot try to get it done before the season, but I don’t want to rush it if I don’t know,” he said.
Click to expand...

Club Member
“...just because they’re local I get to get up there a lot...”

Yeah that did not read all that well. But we're in a good spot here
S

He said he wants to commit before his season starts. Seems like a Colorado vs Missouri battle and I think Colorado will get him.

Not Sure said:
Grand Junction isn’t exactly “local”, but I’ll take it.
Click to expand...

Right, closer to SLC than Boulder

Club Member
Iowa is TE U this year, but Colorado was a solid TE producing program and will re-emphasize it. I hope he chooses the Buffs and brings that position back to prominence.

4BienemyTDs said:
Iowa is TE U this year, but Colorado was a solid TE producing program and will re-emphasize it. I hope he chooses the Buffs and brings that position back to prominence.
Click to expand...