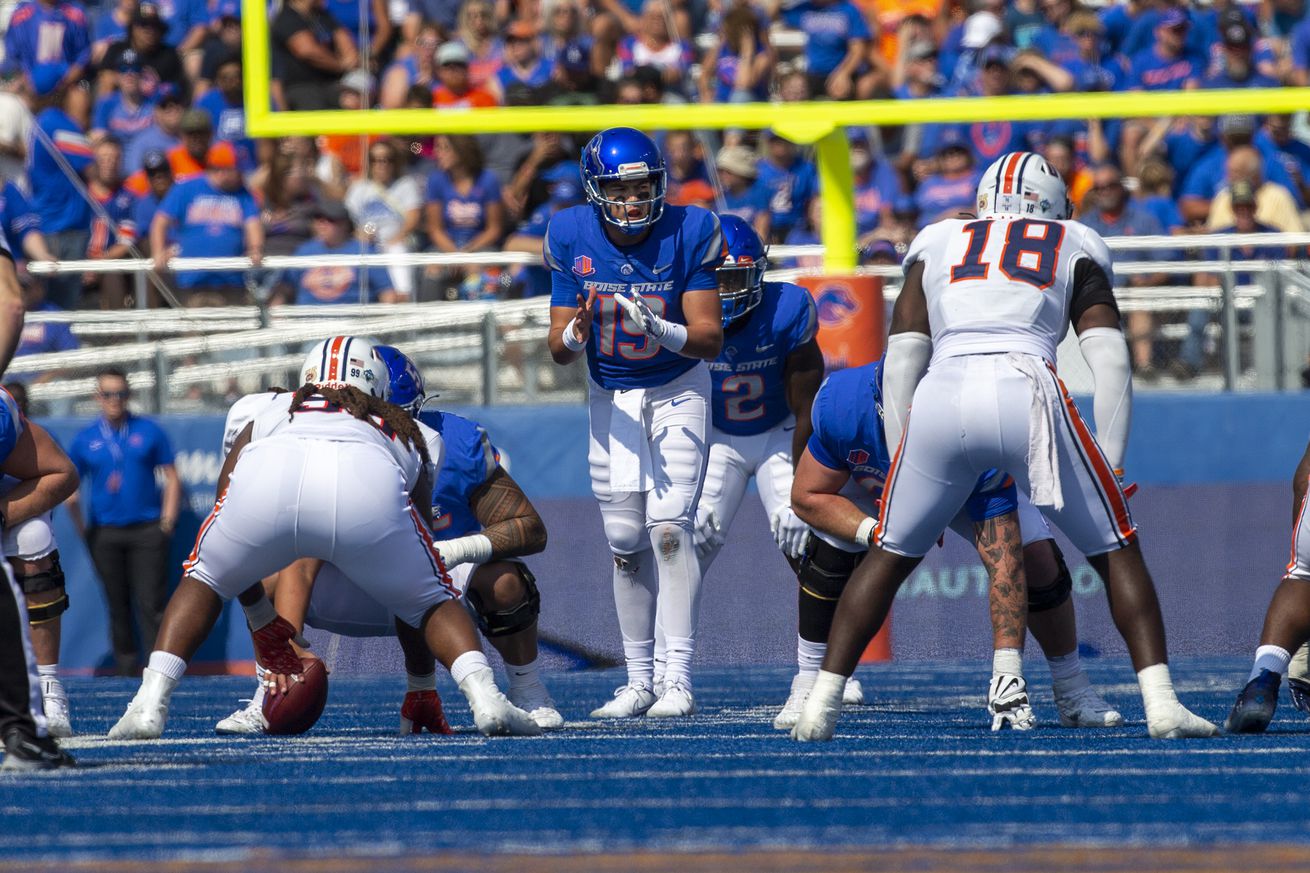 We have more betting picks for your overall college football slate this weekend! Matt and Jack have been positive money wise so far this year, so you may want to take a look.

Boise State comes into this game on the heels of conference play, and this is a tough spot for them. So far, Boise St. hasn’t found much of an offensive groove, and seem to lack an identity. The quarterback play has been worse than expected, and I’m not scared of any gamebreakers on the offensive side. I also fear the Bronco’s capabilities away from the blue turf much less. Plus heading into El Paso on a Friday night the week before conference play screams a sleepy offensive performance for the Broncos.

My analysis on UTEP is much simpler: they stink. They have only been able to eclipse 20 once this year, against their archrival New Mexico State (called the Battle of I-10 in case you were wondering). Their offense has looked out of sorts all year. So, all that combined, I’m not seeing a lot of points in this game. Boise will just want to head out of town with a win and get this over with as quickly possible. I’m on the under. Plus, if nothing else, it will give you a reason to tune into some football on a Friday night.

I’m still buying stock in Michigan’s offense. We haven’t even seen them play the starters for a whole game yet. JJ McCarthy hype train is in top gear, and I am here for it. The weapons are deep at all the skill positions, and the line has looked good, albeit against poor competition. I think people are underestimating the defense for the Wolverines, though. Maybe I’m reading too much into Michigan’s games against 3 of the worst FBS programs in the country, but their front four and secondary have looked formidable when I’ve watched.

Maryland has chops offensively. Taulia Tagovailoa can chuck it, and Rakim Jarrett will be a day 1-2 draft pick next year. They’ve put up pretty good numbers so far this year and look to be one of the better offenses in the Big 10 for the rest of the year. However, they have yet to do it against a defense like Michigan’s in a road environment like the Big House.

Lastly, Harbaugh owns this series. He is 6-0 against the Terps since taking over Michigan, and the average margin of victory is 34 points in that matchup. In fact, the closest game he’s ever had against Maryland was om 2018 when Michigan won 42-21. Even that margin would still cover this spread. Michigan is one of the top 5 teams in the country, and I don’t think they’re being priced like it here.

I guess I am in love with the Mountain West Conference this week. I really don’t have too in depth of commentary here, but the numbers just make sense to me. Utah St. scored 7 points last week against an FCS opponent, even with Weber State turning the ball over 3 times. UNLV hasn’t given up more than 27 points all season, and that was last week against a better offensive team than Utah St. in North Texas. Utah St. hasn’t shown the ability to put together enough offense throughout the course of the game to keep them in a shootout if that is what UNLV wants to do.

I won’t mess with a side here, but I will fade the Utah State offense. If you can only score one touchdown, go 2/15 on third downs, turn the ball over 4 times, and muster only 3.8 yards per play against those pesky Weber St Wildcats, then I must bet against you scoring more than 4 touchdowns against a conference opponent the next week on principle alone.

Our beloved Buffaloes are the worst power 5 team in the country. I fear the team is on the edge of giving up completely. There are 3 QB’s splitting reps with the first team at practice this week, and that is a bad sign. The defense will get run all over against UCLA this week like each game we have seen so far this year.

I’ll plan to continue to make money off the Buffs demise though. They have not covered a game all season, and I’m willing to put my money on that trend continuing. I will bet against them on the spread, perhaps the team total under too, every week until they can prove me wrong.

This is going to be a gross one, folks. Auburn is down BAD in the QB room and Missouri cannot score very well. The majesty of the SEC will be on display. Thankfully, for me, I think Vegas is underrating the dysfunction for both of these teams. Expect few points scored.

Minnesota is very good. Michigan State has the opposite of a pass defense. Easy money.

Utah is an interesting case. They lost a tough one in the Swamp to what looked like a resurgent Florida, who then fell apart in the next two weeks. Utah has a good quarterback in Cam Rising and they have a solid run game, but the defense seems to be missing some of their trademark ferocity.

None of that matters against Arizona State. ASU is in total disarray, with staffers reportedly leaking gameplays and a new head coach in tow. Anything under -21 is a bet.

This game will have more punts than points and it will be glorious.